Every morning I wake up with a broken heart and every night as I lay my head down on my mom’s pillow I try to keep the broken pieces from traveling far.

You are gone and it’s not even a question of accepting that reality but trying to adjust to a new reality that no longer includes you, my best friend and my mother.

October 7th, should have been a normal Sunday with you getting ready for church, asking me if I’d go and gathering your dollars for the plate collection.

on October 7th, I woke at 2:15am and did not hear your breath with the oxygen machine.

turned on the light and saw the look of vacancy on your face even though your eyes were closed.

I felt your forehead which was warm to touch and my hand traveled to your back which was cold. I reached for my stethoscope and placed it on the honey coloured skin on top of your heart.

No sound, no breath, an empty shell void of the pulse of life it once contained.

At first, I was relieved.

The previous day, as I held your hand, I begged you to go, to let go of the body that so betrayed you. To let go of the organs slowly shutting down. To let go of the month of starvation your body endured. To let go of the dependency on the morphine I resented giving you for I knew each dose sent you further into oblivion and I so badly wanted to see you smile at me with eyes that saw me and not death.

It is almost six months since you’ve gone.

The morphine and the Percocet sit in my medicine cabinet.

Sundays are bad and I always hold the vials in my hand contemplating, while being angry at you for not taking me with you. Each Sunday that passes the urge to take them diminishes.

You so loved life and I’m trying so hard to learn to love and dwell in it as you often wished I would. 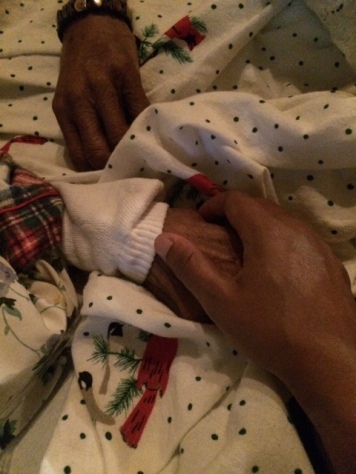 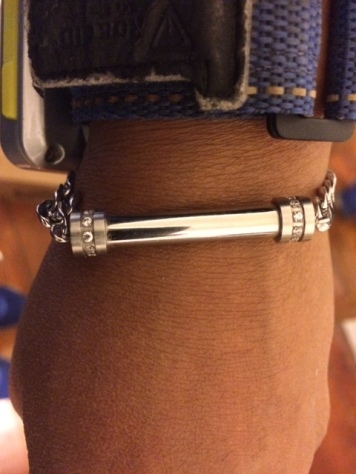 I have no choice, trudging through trying to find the new ‘normal’ while desperately holding on to what was, knowing the was, is in the past and no longer has a place in the present.

I so miss you mom, my butterfly and my best friend. You are at peace, flying through another dimension. I pray you will be there, when it’s my time, to welcome me into your world as you welcomed me into this world.

For a bit of a spell,

I lost my muchness.

My belongings were stuffed, prodded and cursed into my 1991 Honda Civic Hatchback . Once the goods were loaded, I pushed and prodded my cousin (primo) who had gained considerable weight over the years into the car. Seven years spent in California. Seven years of struggle, frustration, immense joy and gratification with my commercial still life photography business and it took only one year, to realize it was not working. Financially drained and emotionally barren, my career was over. Running back home was not an option, but a necessity. It was time to drive east, back home to NYC.

While en route to work, close to the World Trade Center, I witnessed black smoke coming from Tower One of the Twin Towers and immediately thought, ‘Oh Boy, Con Edison messed up big time.’

Along with many others on the sidewalk, I stopped, watched, made small talk and questioned the scene. Then…

The sound of the explosion (which later turned out to be the impact of an airplane hitting Tower Two) was overwhelming.  A bang; followed by silence. Not a bang from a hand hitting a wood table or a fire cracker exploding. The bang not belong in NYC. It was ominous and it pierced my heart. It was reminiscent of a Hollywood action movie where explosives try to obliterate the bad guys-sometimes.

From the bang emerged a fireball, horrific, with vibrant colours of yellow, orange and red. The flames billowed and flowed from the middle section of Tower Two.  It was now 9:20am.  I was late for work but instead of walking towards the job I squatted down to the ground, called my mom, and hyperventilated into my cell as she turned on the TV news for information. Unlike an etch-a-sketch where a gentle turn erases the etching in its sand-like plastic structure, the image of the tower engulfed in flames permanently engraved itself in mi alma (soul).

Mom, my mom endured months of anemia, fatigue and going from 136lbs to 120lbs in less than two months without dieting. Although diagnosed as anemic the site of the blood loss was untraceable. Unable to walk up steps and sleeping most of the day, mom gave in to her primary care physician’s suggestion to have a colonoscopy and endoscopy.

The day before the scheduled 31st  appointment began with the “prep”- Miralax and 64 ounces of clear Gatorade, chased down with two Doculax tablets. The combination produced the desired cleansing needed for a clear colon track. Mom’s nickname during the procedure was “Shitty-Bottom”. Washington D.C. has its “Foggy-Bottom and now mom had her “Shitty-Bottom”. The nickname supplied the laughter needed as mom ran from bed to toilet.

The following day, the 31st, we took a cab from Brooklyn into the city. The cab driver maneuvered through the Brooklyn Bridge unto the FDR Drive during early morning rush hour simultaneously driving with one hand while yelling into a cell phone. The colonoscopy day, the following day began with the check in. Mom changed into a blue gown with non-slip padded bottom socks. She joked with the nurses as she lay on the procedure table waiting for the Dr. Crawford who arrived and explained the procedure and risks. Mom signed a release form absolving the hospital of procedure liabilities. The nurses nodded at me, signaling my time to leave the room and I kissed mom. As I went through the doorway, I turned back and was relieved to see mom relaxed and ready. She was 82 years old.

A week later, Dr. Crawford diagnosed mom with colon cancer as I cried hysterically in the consultation room. Uncomfortable, and affected by my reaction, he spoke softly and stated his father died of colon cancer. My crying stopped. Three weeks later I met the oncologist, Dr. Popa, who whispered to me, while mom was distracted and laughing with the medical techs, words that forever changed my life: Stage 4- Sixty percent survival rate.

I was numb, no tears this time but a tremendous surge of strength which shut down all emotional reactions and released a hyper-drive of analytical thought and rational action. Sixty percent was better than fifty. I was determined not to lose my mom that summer. It was internet research time geared towards mom’s survival; time to fight, dig, claw, scream and PRAY to get what needed to be done, done.

Four bags of blood transfusions, meeting with a cardiologist, stress tests, sonograms,  CBC’s, EKG’s, CT’s, family medical history, hot chocolate and beef patties (mom drank the hot chocolate, I ate the beef patties) mom cried only once and it was not due to the cancer but to the five hours confined to a chair receiving the transfusion. Her daily routine of soap operas, napping and futzing around the house were curtailed and she realized normal routines were not normal anymore.

During the initial consultation where the surgical procedure was drawn on paper to help mom understand, Dr. Lee inquired about setting the surgery date. I replied, “next week”, expecting his response to say in a month’s time. He scheduled the procedure for the following week. Dr. Lee performed the laparoscopic colon surgery  on mom and she was fortunate to have this doctor, who along with his colleagues created the particular procedure she would undergo. There was no apprehension towards mom’s age and Dr. Lee talked proudly of his success with the same procedure performed on a patient in their 90’s. 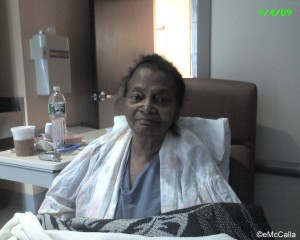 Dr. Popa, Dr. Lee and Dr. Crawford-mom’s cancer team, saved her life and were kind through my aggressive behavior, internet research, and questions on every test, chemo coctail, port procedure, white blood cell count, CBC’s, mom went through. Mom, my mom survived the operation and endured the special diet which followed. She also handled six months of chemo coctails administered through a port inserted into a major vein near the heart, hair loss and weighed 110lbs when it was over.

During mom’s eight-day hospital stay, I did not leave her side but slept on a chair near her bed and hallucinated during the day from sleep deprivation. Some family members assumed limited responsibility towards helping mom through her recovery but the help was at their convenience while others continued onward with their lives buried in self-absorption.

Three years later, Mom, my mom now weighs 140lbs and is in remission and I am finally receiving the much needed help in calming the Little Earthquakes.

Little Earthquakes, while associated with war veterans is also linked to less severe exposure to trauma which may produce similar symptoms in various degrees.

**Mom continues at New York-Presbyterian/Weill Cornell Medical Center in NYC for all her medical needs.