Religion and spirituality are tricky subjects when it comes to defining the person I see in the mirror. Leftist political views as well as my outright allegiance to LGBT equal rights and marriage would have had me excommunicated from the Catholic Church from the time I took my first communion vows-yes, even at that young age I thought differently.

Although baptism was painless (got to wear the mini wedding dress with the veil ,white gloves and my Buster Brown patent leathers), the sacrament of Confirmation would not take place in the near or distant future. Although, I attended and survived the weekly classes, the decision was made to hold off on the commitment before choosing my confirmation name.  I was not ready. It did not feel right. The decision to commit to a dedicated religious life absorbed in guilt and yearly confessions would have to wait until later when and if maturity set in.

I remained a sporadic Catholic throughout most of my adult life, going to services when it was convenient or after some emotional trauma. Guilt going in to service and guilt coming out of service-the perpetual sinner can never find redemption. Rituals followed throughout the liturgical calendar year. I was not devout and did not adhere to the guidelines for repentance and prayers and conveniently forgot confession prior to receiving communion and would never attain “poster child” status due to my lack of pledges and proselytizing.

Eventually my presence at services ended but I read the bible infrequently to make up for it. I lived life, partying, working, career driven, relocating across country, establishing my career, losing my career and relocating back. However, mí Alma salio de mí cuerpo… family illness moved in and I sought respite at a Catholic church in Brooklyn.

The church I went to in Brooklyn has a façade set in dark stone, some, dislodged and missin 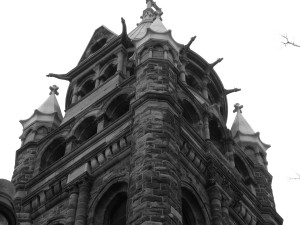 g. The grey gargoyles near the steeple peer down crouched in their perches as if preparing for flight.  The interior ceilings once white washed contain water stains and holes while the tile flooring is dingy, caked with dirt.  It is in need of structural repairs and lacks the finances to get it done.

A Church can be grand, with flaws and all and this church is grand because its priests deliver uplifting sermons and parishioners who remain steadfast regardless of their dwindling numbers or strained finances continue to attend services.

I attended this church three to four times a week during mom’s doses of cocktails and discovered peace, stillness and comfort. Incense did not burn during mass, communion wafers were divided in half and electrical candles replaced the wax and wicks. It was cold, very cold during the winters and hot and humid during the summers. Nevertheless, I continued to attend because I needed to. Sitting in the pew, in the dimly lit church with the altar before me, allowed perseverance and hope to seep into my thoughts and strengthen me.

A friend posted this quote on FB.

“Let me tell you this: if you meet a loner, no matter what they tell you, it’s not because they enjoy solitude. It’s because they have tried to blend into the world before, and people continue to disappoint them.” ~ Jodi Picoult

Read it once and thought this is not correct; some loners may truly enjoy solitude instead of socialization. Amongst a host of comforting attributes, solitude brings reflection, tranquility, solace and protectiveness. With solitude, there is a deliberation of the self that demands stillness, a meditation on the me, myself and I with no interruption.

Many cannot understand the benefits of or how to fit solitude into their lifestyle.  Still others readily presume solitude is a negative state of being; to be alone- that dreadful word-even the sound of it conjures up a barren desert. Moreover, if you are a loner, then you have done something wrong, there is a reason you don’t fit into society, why you don’t blend in.

People are disappointing. The ways we deal or chose not to deal with people can be disappointing and the ways people deal with us or chose not to can also be disappointing. I believe expectations placed upon others, based upon our wants and needs are destined to result in disappointments. We cannot expect or change people to our likings. That may be the reason “loners” give up trying. Expectations are set too high and are unattainable. They have not learned how to navigate through the world while remaining objective and accepting with serenity. Lord grant me…

I am a loner (sometimes being alone is the best way to be). Am I a loner because I tried to blend into the world and people disappointed me? It’s a possibility and may be closer to the truth than I care to admit.

At this time, I am in recovery from two year’s worth of medical, physical but not emotional stuff. Being alone right now, is the best way to be, while I write and get myself together so I can jump into the next chapter of life.

I am unemployed but actively searching. Lack of job prospects but determined not to quit.  Sending resumes out by any means necessary but “email or fax your resume” rhetoric discourages. Interview clothes no longer fit due to weight gain but I took up jogging.

My presence in the present is a continuous struggle towards the illusive light at the end of the tunnel but there is hope that this state of being, shall too pass, opening up another of life’s venues to travel and explore-with good juju everywhere! 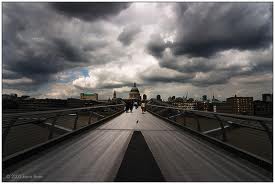 The past protects, saves the memories, and establishes sorrows.  The present holds the past hostage with reflections on should haves, could haves and if only’s. Regrets of the past form foundations as mistakes build upon sedimentary layers.

The future viewed through the present unveils the abundance of projections and uncertainties and guards the if’s and going to’s as well as aspirations and expectations.

A new year marks the turning point of the calendar year and the unleashing of the resolutions set to bring about great changes to ones’ life. Changes that supposedly get rid of the old methods , the old way of doing things, to make way for the new and improved methods, the new way of doing things. Blackboards are erased; to-do-lists altered and dated while corkboard pushpins are moved to the side, making room for the new postcards with the upcoming changes. 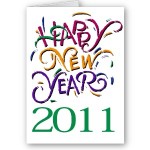 Resolutions remind me of old clothing and old habits. Old clothing dies and ends up in the garbage or the basement and old habits don’t die but remain dormant in the unsolicited part of our brains where it ferments and turns to brain fog. That is why resolutions do not work for me. I will not resolve to do anything. It’s either done or not-no in between and no predetermined date. If it needs changing, it’s changed.

New Year’s resolutions equals new you. What happened to the old year’s resolutions and the old you?  Are they in storage at the local U-Haul?  Under the bed?  In the summer clothing bin wedged between the barrels of winter salt? Or did you conveniently donate them to charity and forgot to get the receipt?

Why the new year impulse to disregard the resolutions made during the old year?